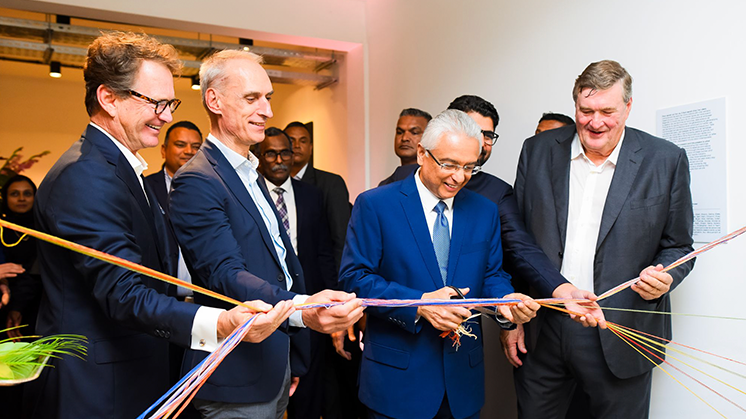 Floréal celebrated its 50th anniversary on Wednesday, 26 October, in its former premises in Mangalkhan, now refurbished and converted into a modern and elegant business centre known as Nouvelle Usine. The setting of this building has kept its original features. It embodies the leading Mauritian textile group's devotion, values, and determination to place sustainability at the heart of its development. "With Nouvelle Usine, we are entering a new era of shared and sustainable growth", summarised Jean-Pierre Dalais, Chairman of the Board of CIEL Textile.

The event was held in the presence of the Honourable Prime Minister, Mr Pravind Kumar Jugnauth, and the Ambassador of Madagascar.

The story of CIEL Textile began with Floréal Knitwear, which counted only 150 employees at the time. By diversifying into textiles in the 1970s, CIEL Group enabled the creation of a thousand jobs through its factories in rural areas," recalls Jean-Pierre Dalais. An exhibition, entitled "50 years of Timeless vision", allowed guests to relive the significant events of the Group’s history and reflect on the company's contribution to the country's economic development.

As the apparel industry trends evolved, the company has continuously reinvented itself to remain a dynamic and innovative partner for its local and international clients. Today, CIEL Textile is a global reference in textiles and clothing. With a presence in Mauritius, Madagascar, India and Bangladesh, it has 19 production units employing more than 23,000 people and exporting 42 million pieces annually.

In his address, the Prime Minister warmly thanked Floréal for its contribution to the development of the country and commended the group for its "glorious 50 years of success”. Pravind Kumar Jugnauth congratulated the company's former directors, current directors and employees. "You have achieved an incredible milestone and are moving on to bigger and better things. Not only for your organisation but also the entire hospitality industry in Mauritius." The PM recalled that Floreal Knitwear has also contributed to the country’s industrialisation. He expressed special appreciation to Sir Pierre Dalais and the Group’s other founders, whom he added, had a far-sighted vision and a deep commitment to morphing the industry into a powerhouse.

The Prime Minister also praised the group's strong performance: "This is the result of well-elaborated strategies based on technological development, continuous talent development, market expansion and sustainable production. He added that the textile ranks high on the government’s agenda and remains a source of employment. He recalled that the textile industry plays a crucial role in promoting economic development.

Floréal's expansion in this region of the country demonstrates the group's commitment to help advance and create jobs for all and improve the quality of life for all. "I am convinced that with the support of our partners in the field, our country is heading toward brighter days. I am certain that as you are celebrating your past, you are also shaping the future," the Prime Minister concluded. Pravind Jugnauth then proceeded to inaugurate the exhibition before meeting with the group's officials.

“Since 1972, the business community in Mauritius has invested substantially in developing our manufacturing units to make them world leaders," said Jean-Pierre Dalais. We are today ranked among the best shirt producers in the world. The strength of this success lies in CIEL Textile's ability to transmit its values to its employees.

In the opinion of Arnaud Dalais, Chairman of the CIEL Group, over the years, Floréal has evolved into somewhat of an institution: "Floréal has been an extraordinary training school for all textile workers and managers in Mauritius. Many of them started in the industry and went on to pursue their careers elsewhere. Not to mention the fantastic emancipation of women in the world of employment in the 1970s and 1980s or even the enhanced purchasing power of many households”. For Arnaud Dalais, the development of Floréal, the pioneer of the textile industry in Mauritius, "was an important element of the famous Mauritian economic miracle from the 1980s onwards”.

While acknowledging the contribution of those who have helped drive the group forward, Arnaud Dalais paid a special tribute to Sir Pierre Dalais. His boldness, vision and leadership have been the foundation of Floréal Knitwear's success. Before his departure in 1991, he had paved the way for the younger generation to take over. However, as Arnaud Dalais says: "The road has not been easy; it has even been tough at times. However, we have had high-quality teams and enlightened management working with us each time. Our history is one of men and women, one of hard work and the continuous pursuit of excellence in our operations, with the ultimate goal of ensuring the satisfaction of our customers”.

For Amit Khullar, Chief Executive Officer of Floréal, this golden jubilee is a fantastic "People Journey". "What does a small island in the middle of the Indian Ocean know about luxury and high-end knitwear? Luxury is nothing more than a passion for excellence and customer knowledge, hard work and the extensive know-how that our employees have developed... With this culture of luxury, our teams have transformed the vision of Floreal Knitwear into what it is today: one of the world's leading producers of premium knitwear," he said.

Strong ambitions for the future

CIEL Textile has a positive outlook for the future. That future will be built, according to Eric Dorchies, CEO of CIEL Textile, "on a solid mix of boldness and agility and a strong corporate culture." "With its factories' current and future capacities, CIEL Textile is positioned to increase its production by 50% over the next five years. A goal that the company will achieve by pursuing its vision of being a partner of choice for mid- and high-end retail chains through the

unmatched quality of its production. "We must also pursue this rich collaboration between the private and public sectors, which has been fundamental to our success. Together with the various partners, we can make Mauritius shine even brighter internationally," he said.

From the outset, CIEL Textile understood the need to adopt responsible production methods. The group joined the Sustainable Apparel Coalition (SAC) in 2017, becoming the first sub-Saharan African member of this global alliance. "We want to embrace our responsibilities fully. From our energy consumption to our waste management, we are reviewing our processes and ensuring that we stay ahead of the environmental revolution that is taking place in our traditional markets," said Eric Dorchies

Vertical integration at the heart of CIEL Textile's success

CIEL Textile has become a key regional player in the textile sector through the vertical integration of its operations, offering solutions from spinning to apparel. With its three segments, Woven, Knitwear and Fine Knits, CIEL Textile can offer a wide variety of products to its customers worldwide. "We are privileged to work with major markets, including leading brands and retailers in Europe, USA, UK, Australia, Africa, and Asia," asserts Amit Khullar.

The vertical integration practised by CIEL Textile's factories promotes a culture of sustainability, explained Amit Khullar, Chief Executive Officer of Floréal. However, sustainability is first and foremost about the garment, he added. "We are Gold WRAP certified,

BSCI certified and have certifications like RWS (Responsible Wool Sourcing), GRS (for synthetic fibres), and GOTS (for cotton). These are the new standards our customers are looking for. Floréal uses the Higg Index, which assesses environmental and social sustainability throughout the supply chain and is part of the ZDHC (Zero Discharge of Hazardous Chemicals) programme."

This transformation of Nouvelle Usine into an urban business centre is the first in a series of projects to restore former industrial buildings led by CIEL Properties. The 14,000 square metre building, home to CIEL Textile, has been redesigned to accommodate a new generation of businesses in a modern setting, in line with the government's aim to create dynamic, mixed-use areas surrounding metro stations.