Stéphane Turin has been appointed new General Manager of Anahita Golf Club and will officially assume his new duties mid-January 2020.

Stéphane’s mission will be to ensure the progress and sustained growth of the Club. He will report to Patrice Legris CEO of Alteo’s property cluster as well as to the Board of Anahita Golf Limited, chaired by André Bonieux, CEO of Alteo Limited.

His family has been passionate about Golf for generations and Stéphane is no exception; a trained director of golf, he has been working for the past 22 years as Director of the Golf & Country Club de Bossey, a renowned French golf course which hosted several major events such as the Bossey Ladies Championship, a tournament that is part of the second European Feminine Division. He also had a pro-amateur career in the 1990s, winning numerous trophies, most notably the 1990 Peugeot Classic (a tournament also won by Robert Karlsson, Thomas Bjorn, Raphael Jacquelin and Henrik Stenson). In addition, he has refereed for the Federation Française de Golf.

Stéphane is French and speaks fluent English. His wealth of experience will undoubtedly be an asset to the Club

“I am thrilled to join the Anahita Golf Club which is an internationally acclaimed course with outstanding facilities and also the host venue of the prestigious AfrAsia Bank Mauritius Open every two years” states Stéphane Turin. 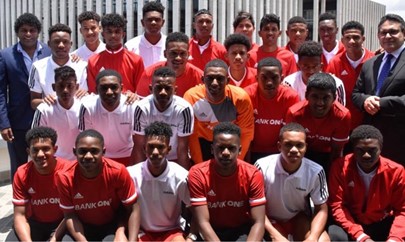