Bank One organised the first edition of its Bank One Leadership Discussions (BOLD) series on September 10, 2019 at the Hennessy Park Hotel, Ebène in front of an audience regrouping thought leaders from various economic sectors.

Pratibha Thaker, Editorial and Regional Director, Middle East and Africa of the Economist Intelligence Unit (EIU), was the keynote speaker debriefing on the global economy and the challenges it is currently facing. While Ben Lim, the Chief Executive Officer (CEO) of Intercontinental Trust Ltd and François Eynaud, CEO of Sun Resorts, shared their insights on the Global Business and Tourism sector respectively.

BOLD: to stimulate quality discussions on key areas that are influencing the Mauritian economy

Ravneet Chowdhury, CEO of Bank One Limited, announced that BOLD has been launched to stimulate quality discussions on key areas that are influencing the Mauritian economy. This comprises both local and international developments; Mauritius being an exports-orientated and imports-dependent economy.

“The objective of BOLD is to present an analysis of the current economic situation. We would also like to stimulate a discussion around what steps can be taken to improve things or enable the economy to take another trajectory. The Global Business Sector, which represents 5.7% of our GDP, has been going through a lot of transitions over the last few years, especially with the new regulations that are now in force. Regarding Tourism, which represents 8.6% of the Mauritian economy, it is encouraging to note that the sector has evolved from the challenges it was facing in 2008-09 and showed modest but robust growth over the past few years,” stated Ravneet Chowdhury, CEO of Bank One Limited.

Ravneet Chowdhury also observed that the global economy is positioned at a very interesting juncture at the moment, with it having witnessed one of the longest and most profitable bull market runs since the previous financial crises, despite GDP growth downgrades across the globe. The threat of another financial crisis however, still looms and calls for precautionary measures.

Pratibha Thaker, Editorial and Regional Director, Middle East and Africa of the EIU, highlighted that the global economy is passing through stormy waters. Global trade flows, manufacturing output and business investment are being buffeted by unresolved trade disputes, political tensions and policy uncertainty. On the other hand, strong labour markets (characterized by low unemployment and rising wages) and still cheap credit are supporting consumer spending and many service sectors. Many governments and major central banks are responding to the uncertain economic outlook by easing monetary policy and loosening the public purse strings. There is some room for manoeuvre on the economic policy front but a build-up of financial vulnerabilities in major markets will weigh on decision-makers and require a careful balancing act.

Regarding the Mauritian economy, Pat Thaker pointed out that “Mauritius is expected to post reasonable rather than spectacular economic growth rates over the next few years. Positive short-term growth factors include public works projects, buoyant tourism arrivals and economic policy adjustments. The authorities have shown some concern over the effects of the on-going US-China trade dispute, uncertainties surrounding Brexit and the slowing Chinese economy, which pose a risk for the flow of goods and capital. In conjunction with short-term economic policy adjustments, the authorities are focused on diversifying the island’s products, services and trade or investment partners. Boosting the International Finance Centre and Global Business Sector will remain central parts of the island’s plans to become a global trade and investment hub, with a particular speciality in facilitating deals across Africa and with Europe, the Middle East and Asia.”

About Bank One Limited:

Born out from a joint venture between CIEL Limited and I&M Holdings PLC in 2008, Bank One Limited chose, right from the start, to serve the four main banking segments, namely retail, corporate, private and international banking. It is, today, recognised as a fast-growing bank with solid fundamentals and was ranked as the 30th most profitable company and 9th biggest bank in Mauritius by The Top 100 Companies 2019 publication.

Over the past 10 years, Bank One has built a client base of over 50,000, serviced by a dedicated team of over 400 well-trained staff and an asset base of Rs40bn. Bank One provides a wide range of banking products and services to its clients through a geographic footprint spread across the island of Mauritius comprising of 12 branches and a well-distributed ATM network. It has also acquired a solid reputation for its treasury services and has built a strong e-commerce value proposition that appeals to customers far and wide. Recognised by Visa for best-in-class e-commerce risk management practices, Bank One has more recently extended its partner network and on-boarded MasterCard and UnionPay.

Rated by CARE Ratings (Africa) with a ‘CARE MAU A+ (Is); Stable’ Issuer Rating, Bank One continues to leverage on the strong presence of its two shareholders, I&M Holdings PLC (market capitalisation of USD 475 million) and CIEL Group (market capitalisation of USD 334 million) on the African continent to position itself as a leading Mauritian and regional banking force with and within global reach.

Pratibha leads The EIU’s Middle East and Africa team and is also the overall manager of the other regional teams. Pratibha has many years’ experience ensuring that The EIU’s forecasts and analysis for countries’ economies are closely integrated with their global macroeconomic outlook, with the analytical skills and the regional expertise required to diagnose problems and devise viable solutions. 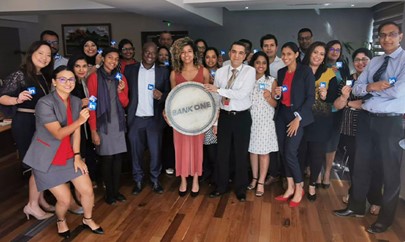 Bank One: first in Mauritius to receive LinkedIn training